The exact geographic definition of a neighborhood is elusive; neighborhood geography is not defined by a national standard.  Many areas have multiple neighborhood renderings.  While many counties/cities have well defined neighborhoods, most do not. To examine the demographic-economic characteristics of a neighborhood, the best options are to use a combination of census blocks, block groups and census tracts.

The Nob Hill neighborhood in context of San Francisco. 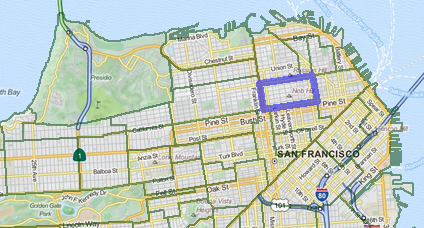 Neighborhood Demographic-Economic Characteristics
Demographic-economic characteristics of neighborhoods play an important role as decision-making information.  The similarity, or dissimilarity, of these small area geographies are the basis for many local government planning operations ranging from law enforcement to transportation.  They help businesses determine where to locate — to serve markets where demand for their product or services is greatest.  Knowing about neighborhood geography and demographic-economic characteristics are critical to real estate businesses.

Census Blocks, Block Groups and Census Tracts
Census blocks, block groups and census tracts are the most useful geographies from which we can develop neighborhood demographic-economic characteristics.  These geographies are all defined by the Census Bureau and nest together.  All counties are comprised of a set of contiguous census tracts. Census tracts average 4,000 population and are comprised of block groups that average 1,200 population.  Block groups are comprised of a set of blocks that average 100 population.  In built-up urban areas, a census block is often the same as a city block bounded by streets.   These areas are defined for each decennial census and most boundaries do not change for the decade.  These features of known boundaries, covering the U.S. wall-to-wall, non-changing geography, nesting geographic hierarchy — and the availability of extensive demographic-economic data — make them the ideal choices to examine neighborhood characteristics and change.  There are advantages and disadvantages for each type of geography.

Census Blocks
The most appealing feature of census blocks is geographic detail.  There are more than 11 million Census 2010 census blocks; approximately 1/3 of these are water blocks and have no population.  These are the smallest geographic areas for which the Census Bureau tabulates demographic data.  The most limiting feature with using census block demographics is that only decennial census data are available by block; no richer demographics such as income or educational attainment.

Block Groups
The most appealing feature of block groups is geographic detail combined with availability of 1) decennial census data, 2) richer demographics from the American Community Survey (ACS) and 3)  annual updates from ACS.  Like blocks, there are no richer demographics for block groups from the decennial census.  There are 217,000 Census 2010 block groups. The most limiting features of block group demographics from ACS include 1) a relative high margin of error associated with ACS estimates, 2) a reduced scope of subject matter data compared to census tracts, and 3) data access and integration is challenging.

Census Tracts
Census tracts were originally designed by the Census Bureau as a pseudo-neighborhood areas averaging 4,000 population.  Approximately 73,000 Census 2010 census tracts cover the U.S. wall to wall.  Over time, the demographic-economic composition of many tracts change.  Tracts changing the most are often of most interest.  The advantages of using census tracts is similar to that for block groups.  Compared to block groups, tract estimates are more reliable and there is a broader set of subject matter available.  Tract data are easier to access and use that block or block group data.  One of the most limiting features of using census tracts to characterize neighborhoods is that tract geography often cuts through more than one neighborhood.

About the Author
— Warren Glimpse is former senior Census Bureau statistician responsible for innovative data access and use operations. He is also the former associate director of the U.S. Office of Federal Statistical Policy and Standards for data access and use. He has more than 20 years of experience in the private sector developing data resources and tools for integration and analysis of geographic, demographic, economic and business data.